skip to main | skip to sidebar

The Destruction and Genocide

The outside world for the most part was very badly informed. A great part of the articles on the Democratic Kampuchea's situation were characterized by assumptions, interrogations and a general sense of uncertainty. Despite the lack of information, the most alert had their own doubts concerning the actual situation.

“The Cambodians always fight among themselves in the matter of concession. The losers in these fights go off to ask help from a neighboring state; the winner must ask for forces from the others.” - King Rama III of Siam

Khmer Proverb: To commit an evil act in order to create a division. "To beat the water and scare away the fish." That was why no one could figure out the “Who was Angkar Leu/Cap Tren,” which are the secret words of Hanoi-meaning “To divide and rule”. “To murder the Khmers for needy-hungry Vietnamese people who need more land”. 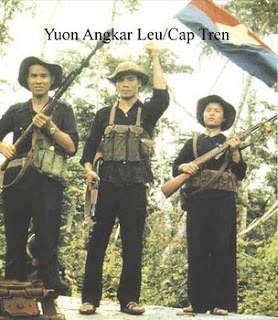 The cause of this astonishing longevity was simple: the Khmer Rouge were not overly preoccupied with American imperialism. Their primary concern was to get even with their Vietminh and Vietcong comrades-at-arms, not to mention the laborious liquidation of the Khmer Vietminh and pro-Sihanouk forces. The war that lasted from March, 1970 until April 1975 was truly an unusual, an extraordinary one. - Norodon Sihanouk

The Khmer Rouge and Sihanoukists do not exist. They were figments of the propaganda and imagination of Mr Sihanouk hiding in Peking. The only forces assigned against the Khmer Republic were the North Vietnamese and Vietcong. These forces occasionally had the odd Khmer among them and they also killed Khmers and left their bodies on the battlefields to trick the westerners and non republican fools. - Chann Sokhom 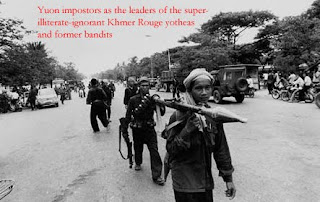 “Amoeba parasites like, communist Vietnam practice, gently and slowly, neo-colonialism in Laos and Cambodia using the traditional Vietnamese method of expansionism called Don Dien, first with territory occupations by armed troops then followed by the installation their families on the recently conquered territories. The armed forces are disguised as civilians, becoming “reserved” soldiers who can be called upon at any time. The latter are then replaced by new armed troops thus progressing further Vietnamese expansionism.” - Mike Benge

Another important step in the first phase was eliminating Pol Pots fervent cadres, yet taking salvageable Khmer Rouge and the regimes slaves to Vietnam. In this way the Vietnamese were able to bring tens of thousands of Kampuchean civilians into their country in January 1978. Shortly after the voluntary retreat of Giaps troops on January 6, 1978, the Khmer Rouge complained of “renewed attempts to overthrow the government” by “Vietnamese agents.” - William Shawcross


Their principal motive, it is apparent, was fear that the North Vietnamese might betray them completely. In Cambodian terms that betrayal had already begun. Sihanouk complained to the New York Times in July that the North Vietnamese were far more interested in American aid than in helping Cambodia. “Suddenly you see Dr. Kissinger smile and Mr. Le Duc Tho smile at Dr. Kissinger. They shake hands, and they go arm in arm and leave us alone.” Norodom Sihanouk

All these testimonials clearly show the conquest of one country by another. The victorious country plunders the loosing one, carrying with it all it needs and destroying all that is useless or inconvenient. The cultural destruction of Khmer inheritance was nothing more than the assassination of the national, cultural, and racial identity of a Nation. It is therefore easy for the invaders or attackers to radically eliminate at the same time the people, the culture, and the identity of a nation in order to introduce the new elements. - F. Ponchaud

Foreign experts on Cambodian History who have been trying to find a tiny needle that the Angkar Leur/Cap Tren throws into the bottom of South China Sea, but no one + many super-illiterate-ignorant Khmer peasants and short-sighted educated townspeople cant find it at all because Yuon secret agents as Angkar Leur/Cap Tren used only Vietcong/Yuon citizens, who used to living in Cambodia since the murderous French colonial period could speak, read and write Khmer much better than about more than 80% of Cambodian peasants can, had shown up their faces as the Khmer Rouge who came out of the jungles everywhere in Cambodia as Khieu Samphan and Prince Norodom Sihanouk clearly tells us Khmer victims of the Vietcong that all the Khmer Rouge are treacherously accused of belonging to Khieu Samphan and Prince Sihanouk: - Some say Sihanouks army, was told To stay at home. Whereas Khieu Samphans and Hu Nims army ordered to evacuate them all out of the city. Some said Sihanouks army dressed up in Khaki, whereas the people who dressed up in black are all Khieu Samphans men. And that researcher confirms that Sihanouks army appeared from the Eastern Region. In fact, Hu Nim, myself like Hou Youn, too, are that we dont have any army at all. We all are just only the appearance of the Khmer Rouge movement. - Khieu Samphan

Most of the world leaders/foreign writers/authors like John Pilger did or do not know much about Hanoi Leaders’ dirty-secret plans and poison words that were hidden in the face of the world and public. The past and present Hanoi leaders are so cunning to have kicked the French Colonialism/Colonialists, the Japanese and American imperialists out of its country by its tactful-political stratagems…Etc. John Pilger calls Vietnamese armies “Heroes”, who knew nothing how to read Khmer History in Khmer, never describe the Past and Present Endless Unforgotten Painful Tragedies of Khmer people at all. He doesn’t even know how many groups of Khmer Rouge? And which group of Khmer Rouge were real Khmers?

Many foreign journalists, authors/writers, observers, film-markers, pamphleteers, CIA officers/secret agents, and dissemination in all forms of mass media, who find it opportunistic to fish in this troubled water. They ascend from obscurity to champion the cause of the human rights and thus make themselves known to the public. Nearly all of them claim to be Cambodian experts by piecing information together that they have collected from our Khmer Hereditary Foes, Siamese and Yuonese as far as I clearly see so far are full of craps. They only sat in their offices/ homes by drinking coffee, beer, wine and Hennessy….so how much do they know about Khmer Hereditary Foes’ Super-Dirty Demonic Tricks and secret plans. In fact, they are not unable even to distinguish fact from fiction nor can they dissociate human rights from external aggression. Up until now they are still so extremely confused by keep asking themselves “Who was Angkar Leu?”

I find that they get a myriad of exaggeration of falsehood: producing films, articles and pamphlets, like Vietnamese-head with Australian body, John Pilger…etc. Out of sincere ignorance or ulterior motives, they have effectively complicated the conflict, deceived the world and readers, especially the Cambodian victims, diverted the real issues and, consequently, prolonged the war. The state of war in Cambodia has-in turn-serve to legitimize this handful of activities, and the certain relief organization behind them, by allowing them to continue their self-proclaimed role as saviors-but at the expense of the more Cambodian lives.

The Hanoi Leaders, who are afraid of breaching/violating the International Court of Justice/ military tribunal, had used their secret words of “Angkar Leu/ Cap Tren”, altruism aside, disguise their hidden political agenda behind a public face of “humanitarianism” and the constant reiteration of the 1975-1979 tragedy. And the Vietnamese communists/NVA expressed the collective guilt of every modern atrocity in Southeast Asia. They have behaved deplorably…breached the most fundamental races of human decency. And they are also the world’s worst violators of human rights. The awful irony of humanitarian organization to shore up one of the most inhumane regime in recent history is clear enough, which was being created by the “Mysterious Angkar Leu/ Cap Tren”, were the secret-poisonous words of Hanoi-the plans for expanding control in Cambodia, as their ancestors promised and so on.

All the information is imbalance in their article/book/pamphlet, which they didn’t describe accurately and clearly: “Who was the Angkar Leu? Who was behind the Angkar Leu? Why did they create the Angkar Leu? Where and when was the Angkar Leu formed? Who has swallowed up the lands of Cambodian people in the East and the in West? Why did Ho Chi Minh want to incorporate Cambodia, Laos and Kampuchea Krom into Indo-Chinese federation under Hanoi’s thirty and hungry expansionism and hegemonism in South East Asia?” and the Cambodian problem still remains unresolved. Internal factional struggles and external military involvement remain an integral part of the Cambodian Victims suffering. The role of mass media coverage of the war in Cambodia is thus a controversial subject, deserving of serious study. I am so pleased to discover that the Australian mass media of the Cambodia problem and to present their findings in an obscurity of their viewpoints about “The World’s worst Violators of Human Rights” had created by “A Young Mysterious Soldiers of Angkar Leu/ Cap Tren” in Cambodia from 1975-1979, and then from 1979-1991. Those who claim to be Cambodian experts are both useless and hopeless! I think no one is perfect than the others on this earth. As a Cambodian ancestral saying: A four-legged elephant will surely trip; an educated man will surely forget. In other words, to get off the right track/ to make a terrible mistake (in the course of some task).

[Phase 2] 200,000 Vietnamese Citizens were noiselessly shipped back to Srok Yuon

[Phase 6] Leaving Koh Keo Village for Battambang on the Barge, Trucks and Trains like animals

[Phase 8] All Children were Brutally Separated from their parents

[Phase 10] All Khmers who were Brutally Starved and Forced to work Extremely hard...

[Phase 12] Khmer Krom people and all Cambodians were accused of being Yuon...

The History of Cambodia from 1st Century to 20th Century

[1] What does Kampuchea mean in Pali-Sanskrit

[2] The History of Leper King

[5] Why did Chinese call Cambodia Chenla

[12] Who secretly told Lon Nol to stage a Coup

[14] Peace agreements were to have totally betrayed Cambodia

[16] Who were behind the Gall Bladder harvesters

[17] Who was a mysterious Son Ngoc Minh

[1] If you can’t make up your mind (what to do), you can’t be King
[2] Pol Pot was used as a Lethal Weapon to destroy Yuon Beehives
[3] Why were about three million Cambodian lives spent
[4] Why did Sihanouk brand Yuon as Crocodiles like that
[5] Pol Pot clearly confessed to the world...
[6] Vietnamese secret agents in both Cambodia and Lao
[7] Shrimps Soup of Khmer Rouge Trial
[8] Le Pays Khmer Ne Perira Jamais Srok Khmer never be Annihilated

The True History of Khmer Krom

Click below links to download audio speech of Khem Vesna on the understanding and history of Khmer:

1. The myopia and gullible Khmer